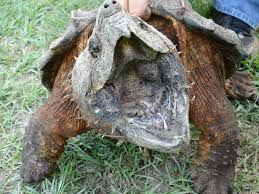 I was writing a post for facebook and realized it would make a good blog.
Last year I was riding around the farm in my golf cart. (that is how we city farmers do it)
The orchard was in good shape, the sheep fence was secure and the lane gave me a clear view of the cows and their new offspring. The only detour I needed to make was to actually go into the steer pasture and check on them because I couldn't see down the hill.
There they were,all either standing in the pond or lounging in the shade except for one. He was dancing a pawing and jumping like he was in a samba contest.
I drove my cart closer and there was the biggest snapping turtle I had ever seen. How big you ask? Well, if you like turtle soup, he would have fed all of the county.  Several things came to mind when I saw them. My dad said if a snapping turtle gets a hold of you, it will not let go until it thunders. Since the sky was bright blue, I sat and studied the situation. The steer could not get away from the creature because in spite of its size, it was quick.
The chances of controlling the steer were better than the chances of controlling the turtle.
By this time Blenna (my farm partner) was on the scene, but being braver than I am, she was on foot.
She shooed the steer back and I shot the turtle with the handgun I carry. Well, I shot him nine times. Apparently I did not hit a vital organ although I did slow him down. He wasn't chasing anyone. After about ten minutes of him laying still, we turned him over on his back and covered him with heavy rocks to keep other critters from discovering him. What we didn't need was a few more predators in the pasture.
The next day, my daughter came to visit. She brought some of her friends. Their favorite pastime is walking around the farm and exploring. We related the story about the snapping turtle and guess what?
When they came back to the house for lunch, they said the grave was empty. "Couldn't be, " I said.
So off we went to show her where we put the thing. Well, indeed, it was gone. We followed the trail and that monster had dug out of the whole, turned over boulders it took both of us to lift and made it at least fifty yards down the creek bed before it died.
I am not a big proponent of killing things. We have a do no harm policy here. But when the safety of one of the animals or one of us is threatened, I will pull the trigger.
Did you know a snapping turtle will dig through your pond and destroy it so it will no longer hold water. They are nocturnal and love to lay in wait for prey. Never pick a snapping turtle up by the tail. they are usually too heavy and if they get angry, they can reach up and get you.
And never try to find out if it is true that they won't let go until it thunders.
Posted by Unknown at 9:34 AM