Tattered Wings, off the computer and into the world

Today, I finished the final rewrite on my novel Tattered Wings.
It will go to my friend and friendly editor Marlee Yant in the next few days.
Tattered Wings is a timely story about Kenny Wallinger and Jeffrey Stainhour.
They are two strangers brought together by a vicious murdering spree perpetrated by sixteen year old Kenny.
Jeffrey, a successful middle-aged attorney, knows nothing about criminal law yet finds himself center stage when he defends the boy.
There are stumbling blocks.
Everyone knows Kenny is guilty. Even Kenny does not deny his own guilt.
Our story is about our attorneys personal life, which falls apart and his obsession with the whys and hows of the murders.
What kind of a person walks into a school and opens fire on innocents he does not know?
Does it matter if it is a shopping mall, a college or a political rally? This has been going on for years.
The first recorded mass murder was in the 1800's and was committed by a Native American.
What or who pushed Kenny?  Is he insane? Were there indications he was capable of the horrors he achieved?
We find out.
Along the way we meet the Sister he terrorized.  We meet his religiously fanatic and insane birth Mother.
Kenny's birth Father has always loved him, yet being a coward , he never stood up to anyone.
And we can't leave out Shawna, Kenny's horribly abusive Step-Mother.\
As Jeffrey pokes and prods into the case, his marriage of over twenty years falls apart.
This novel is told in 90000 words of fast paced prose.
It answers questions, but creates some also.
The characters, although fictional, are people you will care about and others you will loathe.
I had no idea when I began it, someone would take the lives of twenty beautiful children in Connecticut.
God Bless them and those left behind.
Susan.

Posted by Unknown at 1:58 PM No comments:

Yesterday morning I got up as usual and followed my normal routine.  Put my best friend Diggitty, a mini daschund, outside to do her morning ritual, turned on the coffee pot and sat down to see what happened in the world overnight.
It struck me how incredibly nervous I have been the last few days.  I really can't put my finger on the immediate source.  We all have drama.  Children to worry about (no matter how old they are).  A million things to do for the upcoming Holiday Season. It goes on and on.  Nothing has changed, so why am I  so nervous?
Then it hit me like a ton of bricks.
While I wait for Diggitty to come back in and the coffee to brew, I am thinking of the five hundred things I need to do.
While I am in the shower I am thinking about what I will wear. When I am getting dressed I am thinking about feeding the cats and dogs and whether there is enough pet food to get through the week.  While I am feeding the animals, I am wondering if their water is okay or if the greenhouse needs to be watered.  While I am putting out fresh water and cleaning the litter box, I am thinking about what to eat for breakfast.
Let me tell you folks.  It is not yet nine o'clock and I am exhausted.
I sat down and tried to think of when I am the calmest. It is when I am either reading or writing.  Why?  Because you can't read and think about anything else and you can not write and think about anything else.
Ah, a clue.
There have been many books written about staying in the now.  They are good advice but I didn't heed them until this morning.
Today, I got up, slipped on my bedroom slippers and made it a point to notice how comfortable they made my feet feel.  I carried by little friend to the back door and on the way I flipped the switch on the coffee.  Instead of obsessing about the events of last night, I stood at the back door and observed the dog as she did her walk about.  I kept my mind on her and what she liked to do.
Got my coffee and sat down at the computer.  I have two books going.  They are both good but one is lighthearted and one serious.  I enjoy writing one more than the other, yet I have so much time invested, I will finish both. But I digress.  While I was checking out facebook I made it a point to see my friends as they are.  Really pay attention to what they think was important enough to post.  Had to laugh.  Most facebook postings are frivolousness.
When I took my shower, I took time to feel the water flow down my body.  I felt the shampoo lather in my hair and the sensation of the shower gloves on my body.  Okay. Maybe I sound a little crazy.    Yet  it is now nine o'clock again and I am going to try this for the entire day.  Maybe again tomorrow.  No phone while driving, no book while eating.  Just a day of paying attention.
Will it help?  I will let you know.  I can say I am not as exhausted as I was this time yesterday.  And everyone else around here seems calmer also.  Humm.
Posted by Unknown at 9:51 AM 2 comments:

When you said you wanted to make a of bronze of David I didn't think you meant this.

Who  thought you would cut him up and bronze him in small pieces.  It's not like no one knows who it is.  Even with his face contorted, there is no one else who looks like him.
I realize you are a critic but his work was not so bad.
Of course, they will eventually put all the pieces back together, figure out who he is and you will have years and years on death row to mull his writings over in your mind

I would like to give credit where credit is due yet I cannot remember who gave me the idea for this great desert.  Did I mention it was easy?
Okay.  Here comes the ingredient list.  Ready?

Okay. You have the entire ingredient list.  Now, even with my failing eyesight and bad memory, I do not need to write this down before I go to the grocery store.  To need three things from the grocery store has been known to cause me to have nightmares.  I begin wandering down the isles trying to jog my memory as to what the third thing might be. Once I realized I had been looking so long, the security person had been alerted and was following me. This  does not happen to me when I make this recipe.

Now, pour the dry cake mix into a bowl, add the 15 oz can of pumpkin and bake according to the directions on the cake mix box.  Okay, you are done.  It is delicious.

Today at the gym.  Yes, I do go to the gym. I like having my car seen there.  Makes me look athletic.  Oh well, about what I heard at the gym.  One of the ladies told me she uses the same spice cake and pumpkin and adds cinnamon chips and makes cookie out of it.
Now. I don't have any advice about it.  I am wondering about the consistency of the batter for cookies.
If you want to try it, I suggest you watch the first batch carefully until you know how long it takes to bake them.
I plan on blogging daily, but if I don't with the Holidays and traveling, I will take this time to say Happy Thanksgiving.
Safe travels and be nice to one another.  We are all we've got. 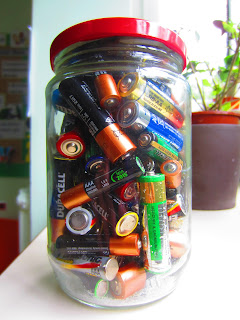 “What is that, Grandma?”
“ It is a jar of batteries.”
“Are they new or used?” Tyler asked.
“I'm really not sure.” Grandma grinned
“Then why are you saving them? Are you going to recycle them?” Tyler was intrigued
“No, actually they are a conversation starter.” Grandma answered
“Well, how would that work?” Tyler asked picking up the jar.
“I don't know. You tell me.” Grandma laughed.
Tyler sat the jar back down on the table and looked at his Grandmother as a huge smile overtook them at the same time.
“Oh, Grandma!” He chuckled.
Posted by Unknown at 1:52 PM 10 comments: