There's a snake in the house! Help!! 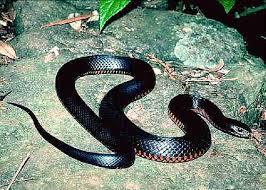 My youngest daughter called to tell me about a snake that found its way into her kitchen and it reminded me of my own snake story.

I went to the garage to retrieve a soft sided cooler to take on a treasure hunting day I was planning.
It was on a shelf over my head so I reached up and took hold of one of its straps. As I pulled it toward me a four foot black snake slid down my neck, down my arm and onto the landing at the top of the stairs. From there he slithered, at high speed , into the kitchen where he scooted sideways toward the living room.
He acted like I was after him instead of trying to retreat.

Now, I know a four foot snake  is small in the black snake family tree, but this guy was fat.  He hadn't skipped a meal in awhile. I knew why we didn't have mice in the garage.

Did I mention the hair was standing up on the back of my neck?  I am prettified of snakes. I remember when I was a kid, we petted one at the St. Louis Zoo.  They are dry and smooth and don't feel anything like they look.  I don't care. I don't like them.

I know you think I am going to tell the story of how I picked that sucker up by the tail and through him outside, right? NOT.

I called for help.  I was going to have to do something quickly before a dog or cat came into the room or he slithered himself sideways into a floor duct , at which time I would have to move out until he was found. Believe me, there is no house big enough for me and a snake.

My roomy came in and had the brilliant idea we get the broom and dust pan. She said we could put the broom over him to hold him still and then scoop him up into the dust pan and throw him outside.

It was a great idea but the execution was difficult.  First of all, he didn't want to be picked up.  Next, he was unpredictable. It is hard to tell which way something that is moving sideways is going to go next.
Eventually, she got the broom on him tight enough he stop moving ( or he was worn out). Then she was able to get him into the dust pan.  He was so big she couldn't lift the pan with one hand and hold the broom with the other.  I was forced to help.

I chose holding the broom.  I was not putting my hand on that dust pan within three inches of the snake.
Now that he was contained.  All we had to to was get him out the door, down the back steps and across the yard away from the the outside dog.

Good thing we didn't have pressing plans because this was no easy deed.

Anyway, it has been about a year since my adventure with Blacky and I have never gone into the garage for anything that I am not on the lookout for his family.

Ah, the joys of country living.